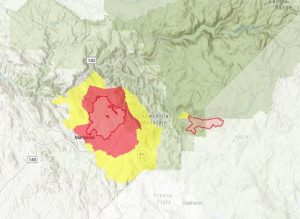 Oak Fire -Evac orders in red and advisories in yellow

Mariposa, CA — A packed town hall meeting was held Sunday evening at the Mariposa High School as officials gave an update on efforts to battle the Oak Fire.

Officials have had success building control lines. CAL Fire spokesperson Jeff La Russo stated, “And we are still actively working on getting more and more (control lines) and working to get you back into your homes. But you just need to give us time to do the work, because as you have seen, this fire has done some crazy things.”

Providing a review of the initial attack, CAL Fire Madera-Mariposa-Merced Unit Chief Mike Van Loben Sels stated, “The growth of this fire is pretty amazing considering how quickly we had resources there, and how quickly the state supported the incident with all of the aircraft across the board…we really threw everything at this thing from the beginning.”

Sierra National Forest Supervisor Dean Gould noted that there has been great cooperation among the various agencies involved. He added, “When something like this happens (mega fire), the last thing you want to do is have a whole lot of conversation about who should be doing what. That is not the case, at all, with these partners that we have.”

10 structures have been destroyed by the blaze and five additional have been damaged. Many areas around the fire remain under an evacuation order, notably around Jerseydale and Lush Meadow.

Sheriff Briese said that he would allow people back into evacuation areas as soon as safely possible. He thanked the community for their trust. He also stressed that extra enforcement has been arriving to ensure that evacuated homes are safe.

The cause of the fire remains unknown. It ignited on July 22 on Highway 140 near Carstens Road outside of Midpines. The fire activity was less extreme Sunday in comparison to previous days.

According to incident command, “On the north side, the fire passed Sweetwater Ridge and made a hard push towards the community of Mariposa Pines. Three strike teams were able to hold the fire at Bear Clover Lane, protecting Mariposa Pines. Crews worked to hold the line at Footman Ridge, on the northeast side of the fire. Line was completed around the community of Lushmeadows. Fire line is holding on the east side. Crews are working to complete and hold line on the south side. The fire continues to be fuel and terrain driven. The fire perimeter is moving into the Furgeson Fire burn scar in the northeast side. Damage inspection teams began surveying the affected areas.”