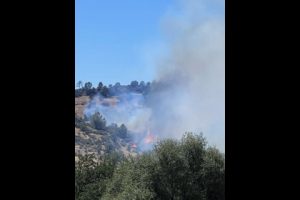 Slate Fire in the Jamestown area of Tuolumne County

The fire ignited late in the two o’clock hour Thursday in the area between Hurst Ranch and Chicken Ranch Road, on the south side of Highway 108, causing evacuation advisories and Bell Mooney Road to shut down from Jacksonville Road to Highway 10. The forward rate of spread was stopped in about three hours. Today, firefighters remained on the scene mopping up.

A section of Sierra Northern Railway tracks were damaged, and due to that, Railtown 1897 Historic State Park train operations are suspended for this weekend, but the park will be open for tours.