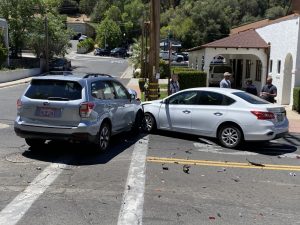 Crash at Stewart and William streets in Sonora

Update at 2 p.m.: Sonora Police report that a three-vehicle collision at the intersection of Stewart and William streets in downtown Sonora has been cleared. The intersection was closed for about 45 minutes as a tow crew removed the wreckage that was blocking the southbound lane of Stewart Street. One person was taken by ambulance to Adventist Health Sonora but there is no information regarding their condition. Further details on the crash can be viewed below.

Original post at 1:30 p.m.: Sonora, CA — A three-vehicle crash has closed an intersection and is hampering traffic in downtown Sonora.

The collision happened just after 1 p.m. at the intersection of Stewart and Willaim streets. Sonora Police detailed that a Subaru SUV, a Nissan sedan, and a Dodge pickup collided. Sonora police have shut down that intersection. Officers are re-directing traffic down Williams and Gold streets, as the southbound lane of Stewart Street is blocked. There is no information on any injuries at this time. An update will be provided as soon as new information comes into the newsroom.