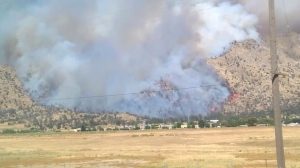 The Erskine Fire in Kern County

Sacramento, CA — More than 250 firefighters from the Mother Lode are fighting fires across the state including one that has been declared a state of emergency by the Governor.

Friday afternoon Governor Jerry Brown issued an emergency proclamation for Kern County, where two people have been killed in the fast moving flames of the Erskine Fire in the Lake Isabella area. Thousands of residents have been forced from their homes.  Approximately 100 structures have been lost with 1,500 still threatened.

“Our heartfelt sympathies to everyone impacted by this destructive blaze,” said Governor Brown. “We join all Californians in expressing our gratitude to the courageous firefighters, emergency personnel and volunteers working tirelessly throughout Kern County to help residents and extinguish this fire.” (The Governor’s entire proclamation can be viewed at the bottom.)

Currently the fire’s acreage is estimated at 19,034 acres with 800 fire fighters on scene including some resources from the Tuolumne Calaveras Unit (TCU) of Cal Fire. Aiding in the fire suppression effort is one Calaveras County strike team of 5 engines and one strike team leader.

Additionally, Columbia aircraft flew overhead Friday afternoon in the Crystal Falls area enroute to the Inyo National Forest to assist with the Marina Fire which has grown to 350 acres off of Highway 395 and Mono Lake in Mono County. Cal Fire reports battling the blaze is one strike team of TCU engines, which includes five engines and one Battalion Chief.

Cal Fire provided this list of TCU and local government resource covering two other major fires in the state:

The Border Fire burning in San Diego County, which now stands at 6,840 acres and 20 percent contained:

Here is the Governor’s entire proclamation:

WHEREAS on June 23, 2016, the Erskine Fire started in Kern County, rapidly burning thousands of acres of land, and it continues to burn; and

WHEREAS a Federal Fire Management Assistance Grant has been requested and approved for the Erskine Fire burning in Kern County; and

WHEREAS this fire has destroyed over one hundred homes and continues to threaten thousands of structures, including additional homes, necessitating the evacuation of thousands of residents; and

WHEREAS on January 17, 2014, I declared a State of Emergency based on the extreme drought that has caused millions of trees to die, and increased the severity and spread of the fires throughout the State; and

WHEREAS the circumstances of this fire by reason of its magnitude, are or are likely to be beyond the control of the services, personnel, equipment, and facilities of any single local government and require the combined forces of a mutual aid region or regions to combat; and

WHEREAS under the provisions of section 8558(b) of the California Government Code, I find that conditions of extreme peril to the safety of persons and property exist in California due to this fire; and

WHEREAS under the provisions of section 8571 of the California Government Code, I find that strict compliance with various statutes and regulations specified in this order would prevent, hinder, or delay the mitigation of the effects of this fire.

NOW, THEREFORE, I, EDMUND G. BROWN JR., Governor of the State of California, in accordance with the authority vested in me by the State Constitution and statutes, including the California Emergency Services Act, and in particular, section 8625 of the California Government Code, HEREBY PROCLAIM A STATE OF EMERGENCY to exist in Kern County.

1.       All agencies of the state government shall utilize and employ state personnel, equipment, and facilities for the performance of any and all activities consistent with the direction of the Governor’s Office of Emergency Services and the State Emergency Plan. Also, all citizens are to heed the advice of emergency officials with regard to this emergency in order to protect their safety.

3.       As necessary to assist local governments and for the protection of public health and the environment, state agencies shall enter into contracts to arrange for the procurement of materials, goods, and services necessary to quickly remove dangerous debris, repair damaged resources, and restore and protect the impacted watershed. Applicable provisions of the Government Code and the Public Contract Code, including but not limited to travel, advertising, and competitive bidding requirements, are suspended to the extent necessary to address the effects of this fire.

4.       Health and Safety Code sections 103525.5 and 103625, and Penal Code section 14251, requiring the imposition of fees, are hereby suspended with regard to any request for copies of certificates of birth, death, marriage, and dissolution of marriage records, by any individual who lost such records as a result of the fire. Such copies shall be provided without charge.

5.       Vehicle Code sections 9265(a), 9867, 14901, 14902 and 15255.2, requiring the imposition of fees, are suspended with regard to any request for replacement of a driver’s license, identification card, vehicle registration certificate, or certificate of title, by any individual who lost such records as a result of the fire. Such records shall be replaced without charge.

6.       The provisions of Vehicle Code sections 4602 and 5902, requiring the timely registration or transfer of title, are suspended with regard to any registration or transfer of title by any residents of Kern County who are unable to comply with those requirements as a result of the fire. The time covered by this suspension shall not be included in calculating any late penalty pursuant to Vehicle Code section 9554.

8.       Local and state laws limiting capacity for care facilities licensed by the California Department of Social Services, including but not limited to, divisions 6 and 12 of title 22 of the California Code of Regulations, are hereby waived for 60 days to accommodate residents who have been forced to evacuate from facilities that are threatened by the fire.

IN WITNESS WHEREOF I have hereunto set my hand and caused the Great Seal of the State of California to be affixed this 24th day of June 2016.