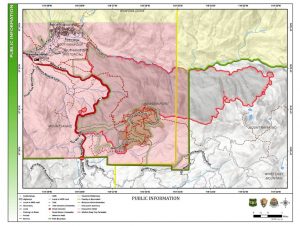 Yosemite, CA — The Washburn Fire, which had been threatening the Mariposa Grove of Giant Sequoias, has now moved eastward into the Sierra National Forest.

Previously, it had just been burning in Yosemite National Park. The Washburn Fire is 4,375 acres and 23 percent contained.

The fire is expected to continue to grow over the coming days due to the dry conditions and heavy accumulation of fuels.

Previewing what lies ahead, the incident command team reports, “Observers from a distance should expect to see heavy smoke production for the next few days as the fire activity increases each afternoon when the temperatures are at their highest and relative humidity are at their lowest, this is expected and not a direct threat to the giant sequoias. And while sections of the fire are not able to be fought head-on by fire crews due to the safety risk for firefighters, much of the rest of the fire is being successfully suppressed, fire lines are being strengthened, unburned fuel in the path of the fire are being burned to “starve the fire” and hot spots are being cooled. Areas which were initially evacuated are being monitored and safeguarded and as soon as it is determined to be safe, these areas will be able to welcome folks back home. Resources from around the country continue to arrive on the incident.”

No homes or structures have been damaged by the fire. There has been one heat-related injury reported to a firefighter.

Another Washburn Fire community meeting will be held this evening (July 14) at 7pm at the Oakhurst Community Center located at 39800 Fresno Flats Road.