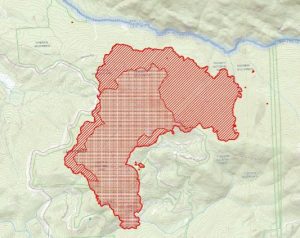 Yosemite, CA: The Washburn Fire burning in the southern section of Yosemite National Forest is 1,591acres this morning.

The fire ignited on Thursday afternoon and is threatening the Mariposa Grove of giant sequoias. The flames charred another 401 acres overnight and zero containment was gained.

“The fire is burning in difficult terrain with continuous heavy fuels in and around the fire.  Significant tree mortality from 2013 – 2015 has left significant dead standing and dead fallen fuels.  This also presents significant safety hazards to firefighters.” noted CAL Fire officials, adding, “Fire scars from past fires located approximately one to three miles from the current fire perimeter will assist firefighters in slowing the growth of the fire.  Firefighters will continue going direct when safe and will scout and prepare indirect lines.”

There are 360 personnel fighting the fire.