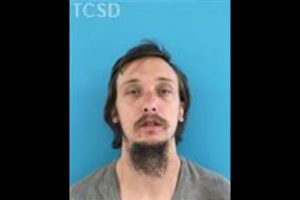 Sonora, CA – A surprise for a man waiting in line to get his food at the East Sonora Taco Bell drive-thru window, as a rock was thrown at his vehicle.

The incident happened at around 9:30 p.m. last Thursday. Tuolumne Sheriff’s Deputies responded to the area of Mono Way near Elsy Court for a report of a male subject armed with a brick. When deputies arrived on the scene, they found 27-year-old Brendan Ruhga sitting on the ground and detained him.

Sheriff’s spokesperson Ashley Boujikian advised, “The victim was able to use his arm to block the brick, which caused minor injury. The victim reported he and another male on scene chased Ruhga a short distance and had him sit on the ground until deputies arrived.”

Boujikian noted that the damage to the vehicle was estimated at around $1,600. Ruhga was arrested on charges of felony assault with a deadly weapon and vandalism. He was placed on a $40,000 bail.

Of note, an incident at the same fast food eatery in November also resulted in Ruhga’s arrest for battery, as detailed here.