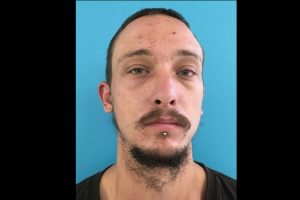 Tuolumne County Sheriff’s Deputies were called to the Taco Bell on Mono Way in East Sonora last week for a report of a subject “air fighting ghosts” in the entrance of the eatery. Sheriff’s spokesperson Nicco Sandelin detailed that when deputies arrived on the scene, they found 26-year-old Brendan Ruhga of Sonora “displaying objective symptoms of intoxication in violation of his probation terms.”

When deputies attempted to detain him for questioning, Ruhga began to spar with them, but within minutes deputies were able to handcuff him. During the scuffle, Ruhga spit at the deputies several times and threatened to kill them, according to Sandelin, who added that he also refused to sit in the patrol vehicle.

Ruhga was arrested for battery and attempted battery on a peace officer, felony obstructing, resisting arrest, and public intoxication. His bail was set at $30,000.