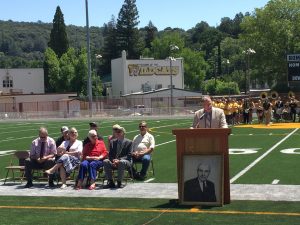 The namesake of the field, Vernon Dunlavy, was the school’s first superintendent and football coach.  At today’s ceremony, Superintendent Pat Chabot said Dunlavy lived by the Golden Rule of “doing unto others as you would have them do unto you.”

Many of Dunlavy’s children and grandchildren were on hand for the event. Other dignitaries included Tuolumne County supervisors Sherri Brennan and Evan Royce, former Superintendent Mike McCoy and school board members Jeff Norstrom, Rob Lyons and Jeanie Smith.

Notably, the stadium renovations include a new field surface, track, scoreboard and walking area. You can click on the video box in the upper left hand corner to see Superintendent Chabot give an overview of the renovations.

The stadium will be utilized during Thursday’s upcoming graduation ceremony. Sonora High first started playing football under Dunlavy in 1920, the stadium was built in 1937 and it was dedicated in his honor in 1953.

Voters approved the $23-million Measure J bond in 2012. The next major project will be the aquatics center in which construction should begin next month and conclude in late 2017. Other projects funded by Measure J include renovations to the school’s cafeteria, Humanities Building and Centennial Hall.