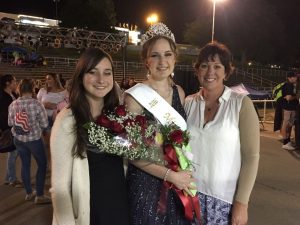 Makayla Ruthrauff with mom and sister

Ruthrauff is an eighteen year old senior at Calaveras High School. She lives in Mokelumne Hill.

During the talent portion of the Scholarship Pageant, which was 30% of the judges total vote, Rauthroff performed “Hallelujah” by Leonard Cohen on a flute.

Ruthrauff will be using her $1,000 Angels-Murphy’s Rotary Club Scholarship this fall, as she plans to attend San Francisco State University. Ruthrauff would like to study Music Management with the goal of becoming a Producer.