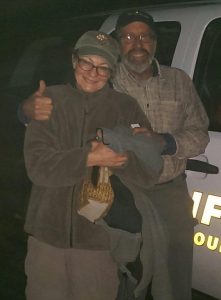 Christine and Jeremy Obers, following search and rescue efforts May 8, 2016

It was Sunday evening in the Leland Meadows area of Strawberry when Jeremy and Christine Obers somehow became separated from each other while heading back to their vehicle, according to Tuolumne County Sheriff’s Office spokesperson Sgt. Andrea Benson.

“When Christine did not return to the vehicle, [Jeremy] placed the call to the Sheriff’s Office,” Benson recounts. “Christine had a cell phone and placed several calls to her husband, telling him that when the fog rolled in she got turned around and did not know where she was. It was very dark and she did not have any food, water or supplies with her,” Benson adds.

Having a working cell phone turned out to be a key aid as responding deputies asked Obers to call 911, which is how they were able to get a good set of coordinates to track, Benson reports. Once officials were able to determine the lost woman’s general location, dispatch advised her to temporarily power down the cell phone to maintain battery power. After mapping her location, search and rescue members drove about a half-hour on unkept roads. Pressing on for about two miles on foot they finally spotted Obers across a creek on a grade. After yelling to her they were finally able to meet up with her about 12:30 a.m., and subsequently helped her hike back to the Obers’ vehicle in the space of an hour.

Benson points to the couple’s experience as yet another cautionary tale to be prepared. “I don’t think they expected to be out there that long,” she says. Regardless, she notes that it is always advisable for folks to carry adequate supplies when recreating in the great outdoors.