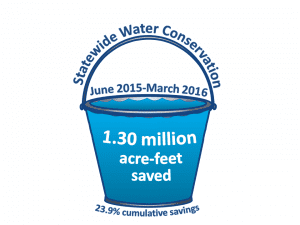 According to the State Water Resources Control Board, across the state, residents collectively squeezed nearly twice in water savings over the month of March than they did in February. March savings came in with a 24 percent improvement over the same period three years ago; 2013 is used for measurement purposes as the benchmark year.

Board Chair Felicia Marcus called the March result a “stunningly welcome” number for the time of year. However, she notes, “It’s not time yet for a drought’s over party. That said, March brought us much needed rain and snow—still less than average but huge compared to the worst in 500 years, which is where we were last year.”

Subsequently, “We’ve gotten a bit of a reprieve, but not a hall pass,” Marcus states. “Now we are figuring out how to appropriately adjust to a better but not ideal situation…we may not need the same levels of conservation as last year, but we still need to keep all we can in our reservoirs and groundwater basins, in case this winter is just a punctuation mark in a longer drought.”

In locally reported figures, Tuolumne Utilities District (TUD) and Groveland Community Services District (GCSD), whose standards were last month reduced to 21 percent, show respective cumulative savings of over 30 and 27 percent when compared to 2013. For March, TUD reported a 12 percent improvement in water savings compared to March 2013; GCSD showed an increase of 23 percent. Calaveras County Water District (CCWD), which was reassigned a 13 percent conservation rate, reported just over 28 percent in cume savings, and over 27 percent for the month of March.

The Water Board, following stakeholder meetings, conference calls, a public comment period and a public workshop April 20, plans to shortly release draft regulatory language on new standards with an eye on adopting them May 18. If approved, the new measures would become effective June 1. Water Board staff reports that, during the engagement period, common themes included requests to exempt suppliers those water sources were deemed adequate to meet normal demand, and recognition of suppliers’ past performance in reducing customer demand beyond the conservation target.

TUD: One-size Does Not Fit All

During the comment period TUD General Manager Tom Haglund chimed in with the district’s thoughts as to how the emergency regulation standards might be rescinded or extensively relaxed, based in part, on this past winter’s snowpack readings and the unique method under which TUD obtains its water supply. As he detailed to the board, TUD’s supply resets itself each year, based upon precipitation and snowpack. As long as the latter is sufficient to both fill and spill from the Pinecrest and Lyons reservoirs, the district is able to receive its full contractual allocation of water from PG&E for consumptive and agricultural water uses, without impacting other uses.

In his communication, Haglund stated, “[TUD] believes that the broad brush approach of the original Emergency Regulation, adopted amidst sustained weather patterns that reasonably forecast no substantial precipitation in California generally, has served its purpose, but should be substantially modified from the current one-size fits all scheme. While the original Emergency Regulation substantially conserved water during a period in which hydrological replenishment was notably absent, the regulation nonetheless also imposed economic harm to water purveyors, local economies and customers, and is no longer necessary in its current form in Tuolumne County and many other areas of the state as well.”