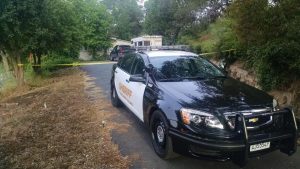 Update at 12:30pm: The Tuolumne County Sheriff’s Office has released more information on an early morning home invasion in Sonora. It happened at around 4:30am at a residence on Cambells Flat Road.

Clarke Broadcasting spoke with Sheriff’s Office Spokesperson, Sgt. Andrea Benson, who says, “The victim was housesitting for the owner of the home and woke up to his dog barking and the outside front motion lights being on. The victim then opened the front door and discovered a male standing there, wearing all black. The suspect asked for the owner by name, and when the victim told him he was not there, the suspect started punching the victim and making his way into the house. The suspect punched the victim several times in the face and upper body, and hit the victim in the head with a wooden table chair in the home, causing the chair to break.  The victim lost consciousness for a brief moment. In that process, the suspect stole the victim’s ID, cell phone, social security card, debit card, and a small amount of marijuana from inside the house. The suspect also damaged the landline to prevent the victim from calling 911. The victim only saw one person, but believed there may be two involved. Prior to the suspect leaving he told the victim that if he (victim) were to call law enforcement, he would find him and kill him. The victim walked to a neighboring residence for help and the victim was then transported to Sonora Regional Medical Center with severe injuries to his face and head. He sustained possible facial fractures.”

The victim did not recognize the suspect, and the Sheriff’s Office is not clear on the identity of the wanted person. He is described as being a white male, approximately 6’1″, mid 30’s, medium build, hair buzzed on the side of his head, wearing a black beanie, black sweat shirt, black pants and black gloves. Anyone with information on the incident should contact the Sheriff’s Office.

Original story posted at 11:40am: Sonora, CA — The Tuolumne County Sheriff’s Office says a home was robbed around 5:30 this morning on Campbells Flat Road in Sonora.

The Sheriff’s Office reports this was “not a random act” and the residence was “specifically targeted.” The suspect is described as being a white male, approximately 6’1″,mid 30’s, medium build, hair buzzed on the side of his head, wearing a black beanie, black sweat shirt, black pants and black gloves. Details are very limited and we’ll pass along more information when it becomes available.