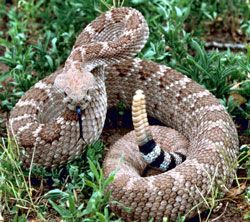 Sonora, CA – Following the reported treatment of a rattlesnake bite this week at an urgent care center in Angels Camp, Clarke Broadcasting reached out to local experts for some seasonal advice — and we got an earful of it to share.

While last year, the warmer drier weather brought some rattlesnakes out before spring even arrived, conditions this year are more normal, according to Kyle Orr, California Department of Fish and Wildlife spokesperson. “Essentially, rattlesnake sightings are starting to increase right now across the state during spring, and it is really two-fold this time of year. Certainly, snakes are more active — but people are also more active — more likely to be outdoors recreating, which leads to more rattlesnake sightings and encounters.”

Generally, rattlesnakes are active from April through October. Orr, who shares he has been a foothills hiker for years, has spotted the locally indigenous Northern Pacific rattlesnake but has managed so far to avoid any unfortunate encounters. By way of advice, he offers, “The best thing to do is give the rattlesnake space, as the animal will usually retreat on its own. Most bites happen when people handle or startle them.”

“Any time you are out and about, people should not go barefoot or wear sandals while walking through wild areas,” Orr forewarns. When hiking, it is best to stick to well-used trails and wear over-the-ankle boots and long pants. Too, people should also be aware, he says, that rattlesnakes are found in urban areas such as rivers, at lakeside parks and even at golf courses. Because rattlesnakes can swim, when recreating in a lake or river do not grab for any objects that may only seem to look like a stick or a branch.

With rattler bites and for any snakebite incident, Tuolumne County Health Officer Dr. Liza Ortiz advises, “If you saw the snake, note the color so you can describe it to whomever you are getting medical attention from later.” She adds, “In general, the recommendation is to try to keep the person who was bitten still — and to keep the bite below the level of the heart – so you are trying to reduce the amount of circulation to that area that is going to go throughout your system.”

Echoing Dr. Ortiz’s medical advice, Calaveras County Health Officer Dr. Dean Kelaita is keen to point out, “Most of the time when we see people brought into an emergency room or an urgent care after they have had a rattlesnake bite, it is because they have been messing with the animal in some way. Often times they get intoxicated and feel the need to molest or pester or pick up snakes – so don’t do that, because that is a recipe for getting bit.”  Immediately after receiving such a wound the victim’s bite area should be washed with clean water and soap, as per American Red Cross procedures, he states. After immobilizing the area that was bitten, get the victim to an emergency room or healthcare facility that can provide treatment with anti-venom.

What To, And Not To Do

“Anti-venom is the only scientifically shown intervention that reduces the bad outcomes from rattlesnake bites,” Kelaita emphasizes. “Most of the time, these bites are not fatal but they can result in tissue damage or function of an arm or leg if that is where you happen to get bitten.”

Some common things not to do with snakebites, Kelaita warns, come straight out of old cowboy movies. “Do not cut the area where the snake has bitten you with a knife and try to suck out the venom or attach suction cups to pull out venom,” he says with a tinge of sternness. Since most people tend to apply tourniquets too tightly he advises dispensing with them altogether. “We see more bad results from tight tourniquets than help that a [loose] tourniquet can provide,” he explains. Kelaita also dispels a common myth that baby rattlesnakes are more deadly because they have not yet learned how to refrain from injecting venom when they strike. He notes that, baby rattlers actually produce much less venom due to their small size.

Mature snakes, which decide when to use their venom, generally use it to help immobilize and break down the flesh of prey before they eat it. So, many rattlesnake bites are not venomous. Kelaita stresses it would be unwise for those who think they may not have been “envenomated” to avoid seeking professional medical treatment. He describes that telltale symptoms may include: tingling or burning at the puncture wound site, as well as swelling, discoloration, possible numbness in the area of the bite; followed by systemic symptoms such as feeling weak, lightheaded, nauseated to the point of vomiting, and difficulty with breathing. “Those are sure signs…and that makes seeking medical attention even more urgent,” Kelaita states.

Keeping grass low in areas around residences is among the preventative actions one might take, according to Kelaita. “Sometimes I see kids running through tall dry grass and I cringe. You know, you have to keep the space around your property mowed…get the weed-eater out and keep the grass and brush around your home low to reduce the habitat in which snakes like to live.”

While not for humans, Kelaita advises pet owners that there is a vaccination for animals that veterinarians have available, which may help reduce damage or prevent death from rattler bites.

Killing rattlers, Orr says, should not be considered a proactive measure. In fact, “I think it is a mistake,” he says. “Rattlesnakes have an important function in nature for one thing. They do a very remarkable job of keeping rodent populations down. So as with any wildlife, certainly our Department would never advise that people — for lack of a better word — wantonly kill wildlife [although] certainly if someone has to defend themselves.” Orr reasons, “They are not aggressive creatures — if they are left to move away from people they will. So really the best thing to do is to not engage them. The better thing is to take good precautions.” While he allows that it is understandable that people would not want rattlesnakes near their home as they do present a hazard, he offers that calling local animal control officers, who can remove and let wildlife loose some distance away, as an alternative.

Advice For Other Critters

In other recent local wildlife sightings across the greater foothill area, Orr says a few mountain lions  have been reported. Although their primary prey is deer and attacks on humans are extremely rare, they have the potential to be dangerous. That is one of the many reasons why, he says, that people should not hike alone. He adds, “If they do encounter a mountain lion, they should make themselves look large, yell, even throw something at them…they tend to not want to interact with humans and will disperse.”

Kelaita reminds Mother Lode residents that this is also mosquito and tick season and that both insects are capable of wreaking havoc to local health. West Nile virus, he says, is something that is seen around the region each year. “Make sure your insect repellent contains Deet, which is known to work well in keeping mosquitoes at bay,” he suggests. He adds. “Times to be especially vigilant are early in the morning at sunrise and at sunset, when mosquito activity levels are at their highest. Cover arms and legs with long sleeves and pants. Removing standing water around your home is a good idea. So dump out those tires and flowerpots and kids’ toys and all those kinds of things near your home that can collect water because they are good breeding grounds for mosquitoes.”

Ticks can carry Lyme Disease and Rocky Mountain Spotted Fever. Besides using Deet, Kelaita recommends checking for ticks often after being outdoors because once imbedded in a host for 24 hours, the organism inside the tick is ready to activate and spread the infection. Instead of lighting a tick on fire or trying to douse it with a substance, Kelaita says the best method of tick removal is to take a sharp knife and at the surface, just tease it with the edge of a sharp blade. Follow with rubbing alcohol and a band-aid to the bite site.

While maladies do not necessarily occur from every tick bite, neither does that characteristic red “bullseye” rash that develops around suspect Lyme infection bites. “In about 60 percent of cases you do, but as many as 40 percent of cases…do not start out with that red ring,” Kelaita cautions. “If you see one, it is not a good sign, and you need to seek medical attention, in which antibiotics can be used to prevent Lyme infection entirely.”