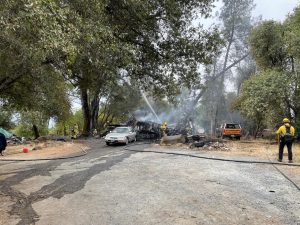 Update at 10:15am: All of the road closures from the fire near Mono Way and Serrano Road have been lifted and the fire is fully contained. CAL Fire/Tuolumne County Fire Assistant Chief Andy Murphy reports that two RVs were destroyed and two other vehicles were partially damaged. The fire also burned about 1/4 acre of vegetation. The cause of the blaze is under investigation.

Update at 9:30am: Progress is being made in knocking down a structure and vegetation fire in east Sonora. Earlier there were 2-3 homes that were evacuated by the Tuolumne County Sheriff’s Office on Serrano and Cavalieri Roads. Because the threat from the fire has now been reduced, the deputies have been released from the incident as the blaze has been contained. Officials will continue to mop up and investigate the fire over the coming hours. You will want to avoid the area if possible.

Update at 8:50am: Officials are making progress knocking down the flames of a structure and vegetation fire near the intersection of Mono Way and Serrano Road. Mono Way remains closed at Standard Road and Upper Mono Way is closed at Highway 108. You will want to continue to avoid the area. 2-3 homes were evacuated by the sheriff’s office near the fire, on Serrano and Cavalieri roads.

Update at 8:34am: Due to a fire in east Sonora, Mono Way is now closed at Standard Road and upper Mono Way is closed at Highway 108. The Tuolumne County Sheriff’s Office reports that officials are evacuating 2-3 homes on Serrano Road and Cavalieri Road. You will want to avoid the area.

Original story posted at 8:27am: Sonora, CA — Officials are on the scene of a residential structure fire on Mono Way near the Serrano Road intersection that has reportedly also spread into some nearby vegetation.

Numerous resources are responding, so be prepared for activity. We’ll pass along more information as it becomes available.