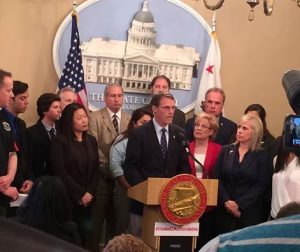 As the deadline approaches for Governor Jerry Brown to release his revised budget proposal, the GOP lawmakers announced their 11 bill proposals Tuesday.  Among the proposals is a cap on property taxes for seniors and disabled military veterans, creating a weekend-long sales tax holiday for school supplies and allowing people to use pre-tax dollars to save for a down payment on a home. Regarding the bills, Senate Republican Leader Jean Fuller states, “It is a very positive agenda that gives voice to Californians being left behind by their own Capitol.”

Instead of redistributing funds through state programs, Republicans contend their legislation would keep money in the hands of low-income people.

Brown has until May 15 to propose a revised spending plan. A list of the 11 bills can be found by clicking here.