A Sobering Reminder To Students 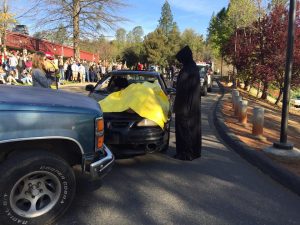 Grim reaper standing over body at "Every 15 Minutes" program

Tuolumne, CA — Sirens, flashing lights and plenty of emergency vehicles converged on Summerville High School on Monday – all to give students a wakeup call on how driving under the influence can have deadly consequences.

School administrators along with the CHP held the “Every 15 Minutes Program.”  Teaming up with fire, emergency, and other law enforcement, they put on a mock DUI crash at the school involving students, with one of the drivers playing the role of a drunk driver.  The crash turns deadly with two students killed in the wreck.  Both students die from the accident.  Officer Nick Norton explains what happens next, “During the school day, there is a student taken out of class every 15 minutes.  He then becomes like the “walking dead” with his face painted white.  Then the students’ tombstones go up on the stadium field.  However, the students return to their classes to represent that every 15 minutes a person is killed by a drunk driver in the U.S.”

The students’ parents are in on the act as they write good-bye letters to their children.  Norton says the goal of the two-day event is to get students to think about drinking, texting while driving, personal safety, and the responsibility of making mature decisions when behind the wheel.  He admits it can be emotional for students, “They’re not used to this raw emotion and that’s what it brings out.  We want them to think about the devastating consequences of DUI.  So, if they do drink they make the call to their parents to get a ride or call a cab.  Hopefully, it will also be that little trigger in the back of their minds someday that if they ever do go to drink and drive they’ll remember this day and they won’t do it.”