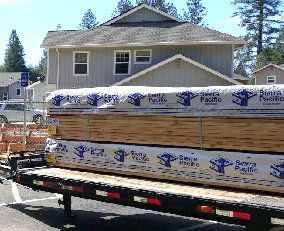 Columbia, CA — One might call it a recovery within a recovery.

Habitat for Humanity of Tuolumne County (HFHTC), which has locally operated for over 17 years as an independent affiliate of Habitat for Humanity International, reports that it will be incorporating some generously donated lumber resulting from an excess of post-Rim Fire-recovered timber into its current project. As previously reported here, the nonprofit recently embarked on its most ambitious build yet; the simultaneous construction of four homes for deserving local families at its Columbia-based Parrotts Ferry subdivision.

According to HFHTC spokesperson Betsy Harden, Sierra Pacific Industries (SPI) is responsible for the gift, which is both a windfall for the project as well as a wonderful symbolic gesture. The inspiration to approach SPI, she says, came at the suggestion of a local vendor who pointed out the abundance of lumber coming to market as a result of the Rim Fire disaster. Previously, SPI had donated all the cedar for the exterior fencing around the Parrotts Ferry project, Harden shares, “But we had not thought about going to them for some of our actual home-building materials.” Since the Habitat project was remounting after impacts from both the wildfire and, ahead of that, the Great Recession, organizers thought perhaps SPI might well be interested in being part of the build’s recovery.

As Harden happily recounts, “So we contacted them, and they went for it…they are donating all the framing lumber for two homes, which represents, roughly a $10,000 savings to us…what we would have spent if we had to go out and purchase it.” She adds that Habitat hopes to ask the local mill folks if their employees would like to come out for a “Build Day” someday soon, using their lumber donation.

Harden estimates that the current build will take about 12 months and the organization is now set up to keep pace through the end of the entire project. “We have 24 units to complete, so we should be able to get it done within six years,” she states. So far, foundations were poured and first-flooring framing is in for the duplex that will house two of the four units now underway. She gently emphasizes, with a twinkle, “We are accepting volunteers out there. If you are interested…you can either go to our website and just click on the button that says ‘Volunteer’ or call the construction office at 288-2096…we can take volunteers Tuesday through Saturday.” For more details, click here.