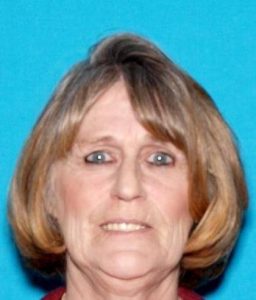 Sonora, CA — A woman was arrested after hitting a vehicle, leaving the scene, and then attacking a Sonora Police officer.

It happened at around 3:50pm on Tuesday. The Police Department reports that 67-year-old Gladys Collins of Jamestown allegedly collided with a vehicle on Greenley Road and then sped off at a high rate of speed. She then reportedly drove into the upper parking lot of Sonora Elementary School, after running a red light.

An officer responded and spotted the vehicle of Collins near the school’s shop area. It was pushed up against a gate. The Police Department reports that Collins was sitting inside the car with her three-year-old grandson. Collins told the officer she was aware she had run into the gate, but was unaware of the other collision. The officer noticed that her eyes were watery, her speech was slurry, and she showed signs of being under the influence.

According to a statement from the Police Department, “The officer asked Collins for the keys to her car. Collins refused. As the officer reached into the car to pull the keys from the ignition, Collins pulled the officer’s hand away. The officer then opened the car door and instructed Collins to exit the car. Collins refused. Collins then started the car and put her car in gear. The officer was able to reach past Collins and put the car in park as Collins pressed the accelerator.

Collins was taken into custody and booked into county jail on several charges.

Several bottles of prescription medication were found in her purse. The three-year-old grandson was released to the custody of his grandfather.