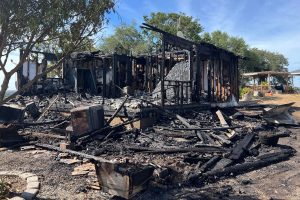 Valley Springs, CA – New details on a house fire yesterday in Valley Springs that also spread to nearby vegetation.

First responders reported seeing smoke from over a mile away as they raced to the residential structure fire that broke out just before noon. When they arrived on the scene in the 5500 block of Amos Lane near Pettinger Road, between Highways 12 and 26, in the Valley Springs area of Calaveras County, the single-family home was fully engulfed in flames.

As earlier reported here, the flame spread to some nearby grass, but it was quickly extinguished at approximately 40’ by 60’ in size. Calaveras Consolidated Firefighters officials relayed, “Firefighters were able to get lines on the structure and knock down the fire and protect the main residence. The building involved in the fire was used as a rental (in-law quarters). No one was home at the time of the fire.”

One adult male was displaced by the fire. The Red Cross was called in to help him with necessary items, like clothes and toiletries, and to provide him with a place to stay, as the home was a total loss. The cause of the fire remains under investigation.