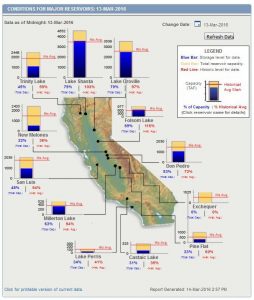 New Melones is a full one percent higher in capacity than after the rainstorms last week, sitting at 529,444 acre feet. The electronic readings released today put the reservoir at 22% of capacity and 36% of the historical average. On March 1st, New Melones was at 19% of capacity and 31% of the historical average. This graph from the California Department of Water Resources shows the New Melones capacity in acre feet over the past eight years, illustrating how far it needs to go to recover from being drawn down during the four years of drought. 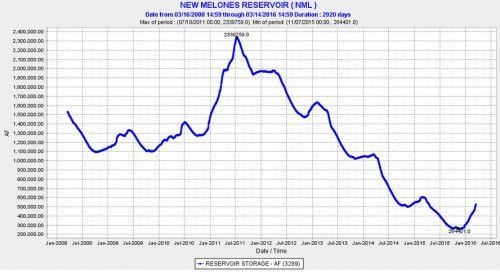 Snowpack serves as a reservoir of sorts, storing water in the Sierra Nevada until it runs off in the spring. The snowpack in the northern area of the state is at 102 percent of normal. The central state region including Stanislaus rivers, Tuolumne, Merced and the San Joaquin are at 26 inches (94%) and the southern region is at 21 inches (81%).

More information regarding the drought situation is here.