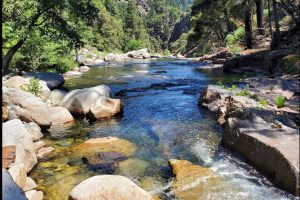 God's Bath swimming pool near the Clavey River in Tuolumne

Tuolumne County, CA – The body of a man who jumped into the God’s Bath swimming hole in the Stanislaus National Forest last month has been found.

The deceased is 28-year-old Devin Brewer of Dumfries, VA, who was living in San Jose, according to his family, and was found in the general area where he was last seen at the swimming hole. On Sunday, a hiker reportedly found his body in the water and called 911.

After an inquiry by Clarke Broadcasting, Tuolumne Sheriff’s spokesperson Ashely Boujikian updated, “Our SAR [search and rescue] team went out and conducted a recovery operation. We want to continue to remind the public to be extremely careful around swift water any time of year, but particularly in late spring and through summer the rivers run fast due to snowmelt.”

Brewer went missing on May 14th after jumping into the cold waters and never resurfacing, as reported here. A dive team was unable to locate the missing swimmer. The search for Brewer was temporarily suspended due to the frigid waters and strong current that are typical during this time of year due to the Sierra Mountain snowmelt, as detailed here. No official cause of death has been released.