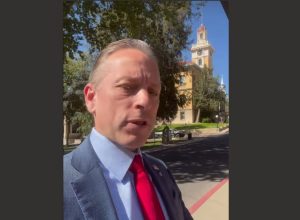 Sonora, CA — The Republican endorsed candidate running for California’s US Senate seat made a brief stop in Sonora this week for a meet and greet with some party faithful in downtown.

In doing so, Mark Meuser announced that he has now reached a campaign milestone of visiting all 58 counties ahead of the June 6 primary election.

Meuser, an attorney and entrepreneur, is trying to unseat Democratic incumbent Alex Padilla.

Meuser says, “I am delighted to have achieved this milestone in my race for US Senate. It’s extremely important for a candidate to reach out to as many voters as possible when seeking public office, as the needs of the people in so many areas of this state are often overlooked by candidates who often only seek the larger population centers to get elected.”

Meuser joined the Dhillon Law Group in 2017 and has been involved in filing various lawsuits against Governor Gavin Newsom over the past couple of years. They have ranged from the governor’s Executive Actions taken during COVID 19 to California trying to remove President Donald Trump’s name from the 2020 primary ballot following the passage of a tax transparency law.

On the campaign trail, Meuser has recently been speaking out against the Biden Administration’s energy policies and rising gas prices.

Two dozen candidates are on the ballot for California’s US Senate seat, and Padilla has been endorsed by the Democratic Party, and Meuser by the Republicans. The top-two vote-getters, regardless of party, will move on to the November General Election.