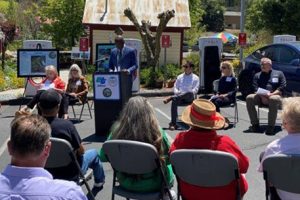 Groveland, CA – The community of Groveland, along with Caltrans and Tuolumne County leaders, came out today to celebrate over a million in state funding to make upgrades along Highway 120 and Mary Laveroni Park.

The grants were announced in March, with $1.27 million in Clean California grants going to Groveland, as earlier reported here. District 4 Tuolumne Supervisor Kathleen Haff, who represents Groveland, spoke at today’s event and told Clarke Broadcasting, “I was blown away, actually, to find out that Groveland really scored so well.”

Of those funds, Tuolumne County received $249,000 for the Groveland Vibrant Connections to Public Spaces project to make improvements to a parking lot on Ponderosa Lane, off the highway. These include new public bathrooms, and a tourism kiosk with what the town has to offer, bringing a boost to the area’s economy. Haff explained, “Then they’ll [visitors] be better able to want to venture out into the community to find the different shops and businesses. The wayfinding kiosk will help them do just that. So, I think it will be helpful to businesses, especially. ”

The funding for these projects comes from Governor Gavin Newsom’s Clean California $1.1 billion initiative, which is a multi-year clean-up effort led by Caltrans to remove trash, create thousands of jobs, and engage communities to transform public spaces. Caltrans District 10 Director Dennis Agar, echoed Haff, stating, “These projects will provide economic benefits for Groveland and the entire region during its construction and afterward. Travelers will also have a safe, attractive location to park their vehicles and spend some time enjoying ‘Main Street’ in Groveland.”

The rest of the funds, just over $1 million, went to the Groveland Community Services District (GCSD) for its Groveland Community Asset Rehabilitation and Beautification project to give Mary Laveroni Park a facelift. The improvements include enlarging the existing restroom, shaded picnic areas and a covered transit center, as well as access roads and trails linked to the historic Hetch Hetchy Railroad grade for hiking and exploring. Further details are on the flyer.

“It will be great for all the people who live there to have that amenity right there near the trail. There will also be a restroom along the trail from the new resilience center as well,” detailed Haff, adding, “We’ll be well equipped to really help people see outdoors, enjoy nature, and hit the trail.”

Haff stated that these projects will take several years to complete.