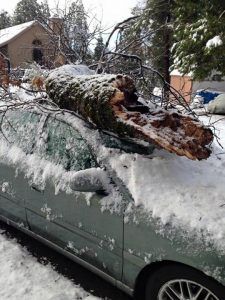 In Twain Harte, a large tree came crashing down on a car parked in a driveway on Ponderosa Drive around 1:30 a.m. Thursday. Luckily no one was injured. The photos in the left-hand image box show the destruction.

The CHP recapped the problems it faced on Wednesday evening as snow unexpectedly blew into the Sonora area at lower elevations than earlier predicted. One of the major hazard areas was Tuolumne Road. With another round of wet conditions hitting the Mother Lode, Officer Nick Norton has one word for motorists – chains. Detailing the issue further, he states, “Unfortunately, a lot of people thinks it is the people coming up from the Valley heading to the casino who don’t want to put on their chains. Actually, nine times out of ten it tends to be the local people who feel that they can make it home in their two-wheel drive car and spin out and that creates a whole log jam.”

Norton says that is why it is imperative for everyone to abide by the “Chains Required” signs, even if it is for a few miles as it is for the safety of everyone on the roadways. Additionally, CHP officers dealt with downed power lines and trees on Phoenix Lake Road requiring several hours of work last night.