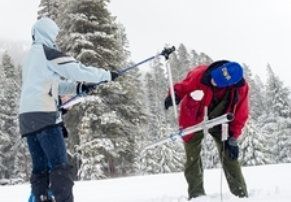 Sonora, CA — State officials will hike up and conduct the first manual snowpack readings in the Sierra Nevada later this morning.

Electronic sensors predict that the statewide average will be somewhere near 107% of average for the date. Manual readings will be taken at a dozen stations along the northern, central and southern Sierra Nevada. Department of Water Resources officials report that although the snowpack’s water equivalent this year is slightly above the historical average, much more precipitation is needed over the coming months to end the drought. The drought is now into its fifth year.

California’s snowpack contributes about 30% of California’s water supply when it melts. Last year at this time the snowpack was only 47% of average for the date. With very minimal precipitation in January, February and March, the state ended with a snowpack in April of only 5% of average.