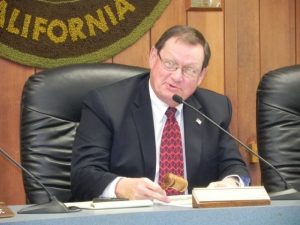 Tuolumne County Supervisor Randy Hanvelt was busy this year, with a schedule that included numerous trips to Sacramento and even a testimony at a subcommittee hearing on federal lands in Washington DC.

Hanvelt was Wednesday’s KVML “Newsmaker of the Day”.

“Tuolumne County is being paid attention to, both at a state level and a federal level” said Hanvelt. “The downside is that it took the Rim Fire for us to be noticed. I’ve been to Sacramento several times this year and people are no longer are confused as to where we are located. We are now seen as a county with a position of leadership”.

Hanvelt continued, “But I remain concerned about several issues including water, the forest, good job opportunities and our tight budget.”

At the beginnning of the year, Governor Jerry Brown declared that California’s economy is strong.

So at the end of the year, is Tuolumne County’s economy strong? Hanvelt said, “No. Our economy is not strong. There are sections of this state, such as Silicon Valley that are strong, but it has not trickled “uphill” to Tuolumne County. We continue to decline in population and the big reason is jobs. We need good jobs and we need to feel part of that economic boon.”

The Board of Supervisors continues to work with both Larry Cope in the Economic Development Authority to develop jobs and with the Stanislaus National Forest Service.

Additionally, Hanvelt has been active with the Fire Safe Council and has been helping to address specific issues in which fire safety and healthy forest issues remain a major concern.