A Dusting Of Snow? 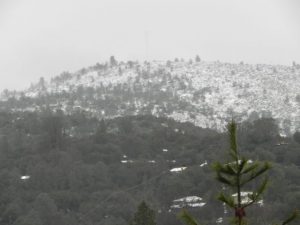 Low snow levels are expected over Northern California tonight and Monday as a cold Pacific frontal system will be moving through.

Although this is not a particularly strong system, it will be unusually cold, bringing light snow down to elevations as low as 200 feet.

According to the National Weather Service, Mother Lode communities could see a light dusting of snow during the early Monday morning hours.

If traveling overnight or early Monday, be aware of the possibility of snowfall at lower than normal elevations. Very slick roads and increased traffic accidents may be part of the Monday morning commute.

Snow is expected to end in the lower elevations Monday afternoon, but continue over the higher Sierra Nevada elevations.