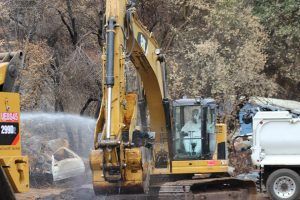 Sacramento, CA — Governor Jerry Brown’s administration has estimated the price tag for the devastating wildfires in Calaveras and Lake counties at around a quarter of a billion.

The cost relates to clean up and debris removal for the Butte and Valley fires, which state administrator expect will reach at least $243 million. The Department of Finance has announced that it is shifting another $83 million from the state’s rainy day fund to help pay for the cleanup. Officials anticipate spending another $105 million in January.

With both blaze sites already declared federal disasters, state officials anticipate reimbursement for a large portion of those fire costs by the U.S. Government.

Friday, in a letter to lawmakers, State Director of Finance Michael Cohen summed up the magnitude of the cleanup costs for the two Northern California fires as unprecedented in its magnitude and complexity.