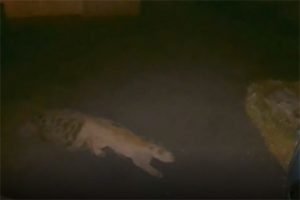 The video shows the mountain lion passing just feet from the house located on Shaws Flat Road near Roble Road, north of Sonora Union High School, as the map below shows. The video was taken at around 5 a.m. on Wednesday (4/27). The first sign of the cougar is a flash of its glowing eyes on the left side of the screen. It slinks by, not disturbing several trash cans as it passes.

Wanting to notify the public, the homeowner, Patrick Spink, tells Clarke Broadcasting, “I have called animal control to inform them, but given our close proximity to the high school (Sonora Union High School), I thought I would let you know as well.”

California Department of Fish and Wildlife officials relay that mountain lions rarely attack humans, as they are solitary creatures and typically try to avoid any interaction with humans. For tips on what to do when a mountain lion is sighted, click here.