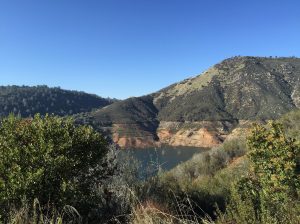 Sonora, CA — The potential to tap New Melones Reservoir waters for regional use in times of need led the Tuolumne supervisors to support a legal move by a Calaveras water district requiring federal approval.

At Tuesday’s meeting, the Tuolumne County Board of Supervisors discussed a request from the Calaveras County Water District (CCWD) for the board to support its Warren Act contract application that, with US Congressional approval, would allow it to store up to 100,000 acre-feet at New Melones Reservoir on behalf of CCWD when there is excess capacity. The contract would potentially allow Tuolumne County to tap the water through a future agreement with CCWD, as CCWD would have the ability to make water available to other entities.

According to District 5 Supervisor Karl Rodefer, while CCWD has pre-1914 and post-1914 water rights in Spicer Lake to help service its district as well as Angels Camp and Murphys, it currently has no right to take water out of New Melones. “They propose, under the Warren Act, to create a water bank in a federally managed body of water through the Bureau of Reclamation,” he explained. The deal would basically enable the district to release water from Spicer without losing ownership of it and store in New Melones.

Rodefer pointed out that, in addition to gaining the ability to purchase additional water supplies, Tuolumne Utilities District (TUD) has pumps in Melones that might be resurrected and placed back into service to increase the county’s resiliency in the event of issues with the main water canal. All the supervisors agreed that providing support to CCWD’s application creates a “win-win” for the region. County Administrator Craig Pedro suggested some minor changes to the board’s letter of support to more greatly reflect what regional gains the contract would create, versus just how it would benefit the county.