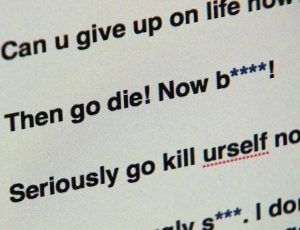 Sonora, CA — When mean locker notes and menacing texts escalate into an on-campus battery by a hooded attacker, are local schools as safe as they could be?

In another related question, how conducive is the climate in the Mother Lode’s “21st century classrooms” for learning these days? Clarke Broadcasting, in a three-part series on the topic, is taking a deeper look into existing elements and improvements being made this school year in Tuolumne County, as administrators address security, cyber-bullying and other concerns.

As previously reported, before summer break, a Sonora High student, while alone in a school locker room, became the terrorized victim of a surprise attack. As a result of the battery by the hooded assailant, whose identity is still unknown, the victim suffered a black eye, several bruises and scratches. According to the student’s father, who appeared before the school board in June to discuss the matter, his daughter had been targeted for seemingly inexplicable reasons and had also been receiving graphic cellphone texts as well as harassing notes in her school locker.

According to the Sonora Police Department, serving as the lead agency on the case with cooperation from the Tuolumne County Sheriff’s Department, it currently has an investigator working on leads. Officials are optimistic that having school back in session will help in finding whoever perpetrated the crimes. Significant battery on school grounds, bullying, and making annoying or harassing phone calls are among the charges that the responsible party and other involved individuals may well face.

As firearms laws vary by state and due to security concerns with regard to school shootings, Clarke Broadcasting asked local law enforcement and the school superintendents about protocol. While guns are generally prohibited within school zones, local law enforcement officials, of course, are fully authorized to carry firearms. However, as a general practice, on-campus supervisors employed by the school districts for security purposes and other school personnel are not authorized to carry.

An estimated 1,000 students are in attendance this school year, according to Sonora Union High School District Superintendent Pat Chabot. “We’re planning on updating our safety plan to include advice from as many people as we can get,” he states. In addition to adopting new protocols for the locker room where the battery incident happened, he adds, “We are looking at attendance to make sure we know where every student is, all the time.”

Funds have also been allocated to update and relocate the school’s security system cameras, so that they provide higher definition viewing and imagery as well as increase coverage in areas that focus on student movement and other such activities. Chabot explains that in the past, cameras were as likely to be pointed at equipment to discourage theft of components with potentially lucrative resale value, such as copper wire. He also indicates that, with construction now completed on the Humanities Building, routes between classes and camera sight lines on them are much improved.

When asked about adopting a “zero tolerance” policy on cyber-bullying and other bullying behaviors, Chabot states, that the district’s plan, moving forward, is to continue working with the board of trustees on “improving school policies in that direction.” It is a necessary move, he affirms, “With technology…cell phones…Instagram and texting, there’s more ways to [bully]. All the reports I have read say this is happening more and more.”

Each year students are issued handbooks that outline policies and procedures, according to Chabot. This year will integrate additional training sessions on sexual harassment and bullying. There will be the Character Counts programs, along with others similar in nature, to “get the kids to understand each other more,” as he puts it. By instituting year-long programs, versus one-day-only events, such as through the freshman Life Skills classes, Chabot says the learning has a better chance to become integrated into school culture and personal behavior. Among the tasks of the board’s ad hoc committee on safety, formed at the beginning of the school year and chaired by school board trustee Kathy Ankrom, will be researching additional materials and ideas for potential adoption.

“We’re doing everything we can,” Chabot remarks. “I think that this one incident was an isolated incident, with regard to not knowing who the assailant was…and we’re still trying to figure out who did that. Overall, I think this is a very safe campus.” He points out, that, unlike some schools in the Central Valley, Sonora High has refrained from erecting walls and barbed wire fences around the campus. “Our community has told us, over and over again, that they don’t want us to look like a prison,” he states. In maintaining both security and a sense of local aesthetics and rural community character, he claims, “We are doing everything that we can to keep this place safe.”

Of the Sonora High incident, Summerville Union High School District Superintendent Robert Griffith concedes, “Every high school goes through different issues when it comes to students intimidating other students.” A bit somberly, he continues, “Unfortunately, in the world that we live in, with this immediate electronic connectivity, kids and – even adults — will say things in an electronic and social forum that they would never say to each other’s face. However, it is a surprise to have social media threats turn into actual acts of violence.”

“Our commitment is to create a safe place for students and adults to function in a culture of support,” Griffith states. “When we face these kinds of things, like Sonora’s doing, it’s incumbent on us to look and say, ‘okay, do we have policies in place and procedures to create that safe place that we all want for our students’?” Although he says that his district has not experienced any significant incidents involving cyber-bullying or physical violence, he points out that those kinds of incidents can happen at any time and need to be effectively dealt with, as they occur.

Griffith says that during its annual administrative retreat the district addressed a need to update its safety plan. Regarding on-campus security improvements, he notes, “We also replaced quite a few older cameras with high-definition cameras, so, now, our system is a lot more accurate.”

Now that all the high schoolers in the district’s estimated 720-member student body have  been issued personal iPads, Griffith says the IT infrastructure is set up with built-in filters that make it impossible to access certain social media and other sites. Of course, he points out, “A part of that [security] is also monitoring students in the classroom, to make sure the devices are used for the instructional purposes for which they are intended.” He adds that, at the beginning of each school year parents and students must all sign use agreements of what the iPads are supposed to be used for. General rules, with regard to bullying and hazing are also reiterated every fall. “Both in class meetings and in the home room — that’s an annual process,” he states.

Smaller certainly seems better, security-wise, according to Big Oak Flat Groveland Unified School District Superintendent Dave Urquhart. Although a student body-size of 36 at Don Pedro sounds miniscule in comparison to Sonora and Summerville, its enrollment is actually up, due to several students whose families recently moved to the area. He reports that about 60 more district high school students are attending classes at Tioga this year.

While campus security and bullying are difficult issues, Urquhart admits, “One of the advantages Tioga…and Don Pedro…have is that they are small. It’s easier to monitor and keep track of the students, because the classroom sizes are small.” Also, he says, “Word travels really fast, what goes on in-school and out of school with the kids — I think we can keep a pretty good handle on that — but, of course, things in the community happen…if they come back to school with those issues, you deal with it there.”

Urquhart ruefully states, “With all the different ways to connect with each other, Snapchat and all these other new ways — and I don’t know them all but the kids do — it is pretty interesting how they can be snapping a picture and shooting it off to their buddy who sits across the room, if you’re not on top of the fact that they have their phone out.” So, he says, “That’s the first thing that are teachers are really on top of…we have some pretty strict rules.” He points to disciplinary consequences, such as the confiscation of student offenders’ cellphones until the parents come to pick them up. “Most parents are on board…I think it is something that we have to stay on top of constantly,” he comments.

With regard to security, both campuses have up-to-date security systems and utilize the mass notification Blackboard Connect service. This year, Tioga has added a crisis counselor to staff and Urquhart indicates there will be one soon at Don Pedro for students to consult if they are experiencing issues. As for new curriculum, in addition to the Life Skills course that is being introduced into the county for freshmen, a newly hired health teacher will be introducing similarly pertinent materials and topics. Of the safety and character training, he says it is all part of an effort to make a positive difference in these changing times. “You hope to hit the right points and hope that students are listening to what you’re saying,” he simply states.

Next: What elementary school administrators are seeing — and doing — to address these issues for students in grades K-8 here.