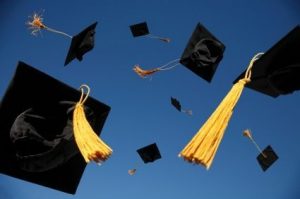 Summerville Union High, with a reported enrollment of 461, indicated a 93 percent graduation rate for 2014, which was up seven percent from the previous year and one percent from its 2012 graduation number. It also reported a dropout rate of six percent in 2014, half of its previous year figure and two percent better than in 2012.

Statewide, 36 percent of the students followed four years through school successfully completed the necessary “a-g” coursework requirements for entrance into the University of California or California State University systems. That is a two percent improvement from the year before, and four percent better than 2013.

In Calaveras County, Bret Harte Union High School achieved an impressive 51 percent in 2014, which was up by 11 percent over 2013 but just six percent better than 2012. Calaveras High matched the 2014 state average of 36 percent, increasing its achievement in this area by seven percent from the previous year, and nine percent from 2013.

In Tuolumne County, state statistics show that only eight percent of the Summerville Union High cohort completed the “a-g” requirements in 2014, down a percent from 2013 and significantly less than the school’s 22 percent rate of achievement in this area in 2012. While Sonora High did somewhat better, it still came in under the state averages. According to the report, the 2014 and 2012 figures show only a 23 percent completion rate, down a percent from its 2013 average.

With regard to completing at least one career technical education (CTE) pathway, the state average of 17 percent for 2014 represents a two percent increase from 2013, up six percent from 2012.

At Sonora High, 46 percent of the four-year cohort completed at least one CTE in 2014; up six percent from 2013 and 15 percent better than 2012. The figures for Summerville show zero percent in this category for all three years.