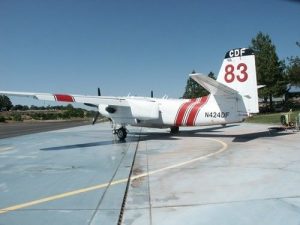 Columbia, CA – The meters certainly run each time Columbia Air-Attack Base aircraft take to the skies, and this week units are in full response mode to an elevated drought-parched wildfire season, further intensified by triple-digit heat.

Ironically, just ahead of yesterday’s Big Creek Fire break out near Groveland, the Mother Lode’s first major wildfire this season, Clarke Broadcasting checked in with Columbia Air Attack Base Battalion Chief Frank Podesta about how the season is going so far. At the time, he indicated an air tanker was actively assisting the Willow Fire, southeast of Bass Lake, in Madera County, and personnel had earlier provided back up on the Lowell Fire, west of Alta, in Nevada and Placer counties.

“It’s a fire season that we had expected with the dryness and severity of the drought,” Chief Podesta remarks, a bit grimly. He adds, “Fortunately, we are getting on top of them as quickly as possible.”

With so many of the base aircraft out and about, we asked how much it might cost to run those units. The chief was happy to provide some numbers to crunch. First of all, fire retardant, according to Podesta, runs $2.94/gallon for the first 100,000 gallons; $2.13 after that. As the base drops somewhere between 400,000 and 600,000 gallons per year on average, the cost for that line item runs somewhere between $933,000 and $1.4 million. By the way, he estimates, as of yesterday, the unit is “real close” to hitting that 100,000-gallon benchmark.

So, annual firefighting costs, considering the above operational aircraft and fire retardant numbers, roughly ranges between $2.3 and $3.1 million per year.

Regarding potential accounting for water use, the chief says while the helicopter generally scoops from nearby reservoirs like New Melones, or local bodies like Cherry Lake, as it did last week for the Rosasco incident, it sometimes generates costs when borrowing from private lands. As he explains, “Some people, if we’re not on their property [fighting a fire] and we’re on a neighboring property…and they want 3,000 gallons we dropped…back, we’ll bring a water tender…and try to fill their pond back up.”

The chief affirms that he considers private drone owners who fly them over wildfires a huge concern, and points to the recent incident in San Bernandino, where five drones buzzing in the airspace above a raging wildland blaze caused a temporary curtailment of air tankers and helicopters. “We’ve had them close by, up in Amador-El Dorado Unit,” he shares, adding. “we had a fire, last year — same thing…a single drone.”

In each of these cases, Podesta states, suspending activities is a necessary, precautionary measure. “If we have an accident with one of them, it’s a good chance of [the drone] taking one of our aircraft out of the sky, and possibly killing somebody…and so we take it very seriously. We’re always looking for them or a potential of [a danger] like that.”

Along with knowing what not to do with drones when wildfires are concerned, the chief says the public should be aware that typically on a second day of a large fire, a temp flight restriction, or TFR, is usually put into place.

“It is to keep private helicopters and manned or unmanned aircraft over an incident out of our incident — unless they talk to either myself, or someone in the air or on the ground,” he states. “We ask [air traffic control] out of Columbia to clear the air and put up the restriction through FAA — and they put warnings out to the pilots that are in the area.” Generally though, he says, clearances through the airspace are given to law enforcement or air ambulance.