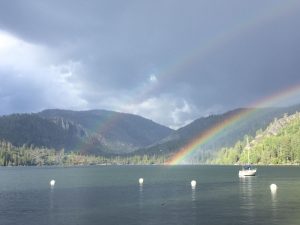 Sonora, CA – Current efforts to pin probabilities of wet El Niňo weather in the Sierras seem as elusive as getting a good thwack! on a piñata while blindfolded.

“There is a lot of information out there about the possibility of an El Niňo weather year and whether this will bring precipitation our way,” admits Tuolumne County Office of Emergency Services Coordinator Tracie Riggs. She points to the latest data from the Department of Water Resources (DWR) and Western Regional Climate Center (WRCC), which demonstrate that previous El Niňo weather systems have resulted in both very low and very high rainfall.  “Essentially,” she says, “we are being told that El Niňo has no strong correlation to above normal precipitation for Central California.”

A NWS Tuolumne County Drought Task Force report on El Niňo, which provides specific figures relating to Sonora, indicates that from last October through July 9, the city received 16.5 inches of rain; roughly 48 percent of its “normal” rainfall of about 35 inches.

The document includes a current Climate Prediction Center (CPC) forecast for a greater than 90 percent chance that El Niňo conditions will continue through the winter of this next water-year; and an 80 percent likelihood for it to continue through early spring. However, the agencies state it is too early to tell what El Niño might mean for drought-stricken California overall, additionally providing back up data that clearly demonstrate no strong correlation for many parts of the state, including the Mother Lode.

In a Water Year 2015 handout, DWR and WRCC indicate that the El Niño-Southern Oscillation (ENSO), which is one of the most studied climate phenomena, provides some predictive guidance in parts of the US, and that this year’s warm ocean and sea-surface temperatures are signaling a strong El Niño event. Whether El Niño will make a difference for the water-year, the agencies indicate upfront: maybe not

So, as the forecasting agencies point out, a strong El Niño happening in a continuing drought water-year might result in drier-than-normal precipitation, as in 1992; an “average” year, like 1973; or a wet year, like 1983. Keep up those rain dances.

*Note: The precipitation index covers the mountainous regions that extend from east of Sacramento to above Shasta Dam.