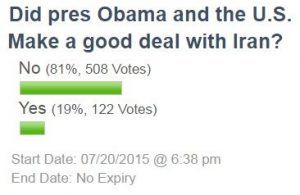 In a recent informal myMotherLode poll the question “Did pres Obama and the U.S. Make a good deal with Iran?” was asked. The results of the three day poll; 81 percent of the 630 votes were No, 19 percent Yes. The Poll was asked on the same day as the news story “Obama: Our Deal With Iran Makes The World Safer” here. In the news story President Obama counters three points he expected others have against the deal he describes “will make America and the world safer and more secure.”

On Monday the United Nations Security Counsel unanimously approved the agreement that has taken two years to form. There are 15 members of the council, 10 who are elected by the 193 member countries for two year terms and 5 who represent China, France, Russia, the United Kingdom, and the United States. Israel, who is a member of the UN general assembly is opposed to the deal.

According to the Associated Press Secretary of State John Kerry said Friday if Congress disapproves of the Iranian nuclear deal, it will undermine President Barack Obama’s ability to act throughout the world. Kerry recently defended the nuclear deal at the Council on Foreign Relations in New York, saying is the only alternative to military action.

The agreement is scheduled to take effect unless US lawmakers vote to thwart it, and they have until September to review the deal. The AP says the Republican-controlled House and Senate are expected to approve legislation in September to preventing the lifting of congressionally imposed sanctions. Congress could reauthorize the Iran Sanctions Act, which was first enacted in 1996 to block Iran from building nuclear weapons as well as from financing extremist groups such as Hezbollah.

Obama has already stated he will veto a bill to renew sanctions, but Republicans may gain enough votes to override his veto. The AP reports that other lawmakers are expected to begin staking out positions in the coming days, after closed-door briefings from Secretary of State John Kerry and Energy Secretary Ernest Moniz, who sat across the table from Iranians during the negotiations.