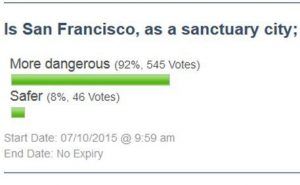 A recent informal myMotherLode poll asked, “Is San Francisco, as a sanctuary city; More dangerous or Safer?” The overwhelming majority voted it is more dangerous with a total of 92% of the responses to the poll.

San Francisco’s 2013 “Due Process for All” ordinance overlooks an individual’s immigrant status unless they have been convicted of a violent felony in the past seven years, and are facing another violent felony charge. Hundreds of cities in the U.S. and Canada have enacted sanctuary laws over the past two decades with the intent of encouraging illegal immigrants to report incidents to local authorities without fear of deportation.

The poll question was asked 10 days after Kathryn Steinle died after being shot in the back while visiting a Pier in San Francisco on July 1st. Mexican national Juan Francisco Lopez-Sanchez, in the country illegally, is charged with her murder. He has entered a plea of not guilty but has admitted in two TV interviews that he found a gun and accidentally fired it.

Lopez-Sanchez has served more than 17 years in prison and was deported to Mexico five times related to four prior felony drug convictions. He was released to San Francisco’s custody from a federal prison in San Bernardino County to face a 20-year-old drug charge for marijuana sale. He was released in April when the district attorney declined to prosecute him. The Associated Press says a month ago the gun used in this shooting was reported stolen from a federal agent’s car. The U.S. Immigration and Customs Enforcement says they should have been notified of Lopez-Sanchez release and they would have deported him a sixth time.

Congressional Republicans have proposed to withhold federal Homeland Security funding and other grant money from cities who do not cooperate with immigration officials. Other federal laws exist to outlaw noncooperation, the main problem is proving city officials aren’t cooperating. Republican presidential candidates Donald Trump and Jeb Bush have mentioned the issue to highlight their differing opinions on immigration.

Trump tweeted on July 3rd  “Our Southern border is totally out of control. This is an absolutely disgraceful. situation. We need border security!” Republican presidential candidate Jeb Bush was quoted as saying, “I have a big disagreement with Mr. Trump about his tone and what he’s saying because it’s not accurate.”