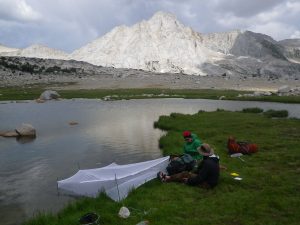 Yosemite, CA — The endangered Sierra Nevada yellow-legged frog was once among the most common amphibians found in area mountain lakes, but the species has seen its population decline by 95%.

That’s according to Yosemite National Park officials, who report that the drop has been primarily due to newly introduced predators and diseases. Seven lakes were recently identified, in the higher elevations of Yosemite, that are ready to support this type of frog population. A total of 40 frogs were reintroduced at two of those sites, and two more lakes will be repopulated in the years ahead. The hope is that some of those frogs, and their offspring, will eventually recolonize three other nearby lakes. The adult frogs being released are given a microchip, similar to those used for pets, so park scientists can monitor where they are migrating.

Yosemite Biologist Rob Grasso says, “The Sierra Nevada yellow-legged frog was once so numerous it was difficult to walk around a lake without stepping on them. Today we know these frogs are a key part of a healthy mountain lake ecosystem and we are confident that we can restore these frogs in Yosemite so that future generations can experience seeing them in high abundance once again.”

The non-profit Yosemite Conservancy has been a major financial supporter of the project.