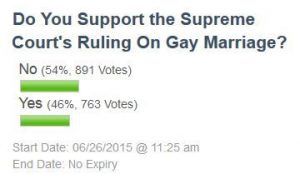 A recent informal myMotherLode poll question asked “Do You Support the Supreme Court’s Ruling On Gay Marriage?” The result was 54% No and 46% Yes.

Justice John Roberts wrote the dissenting opinion in Obergefell vs. Hodges which required all states to recognize same-sex marriage as a constitutional right on June 26th. Justice Roberts wrote, “Supporters of same-sex marriage have achieved considerable success persuading their fellow citizens—through the democratic process—to adopt their view. That ends today. Five lawyers have closed the debate and enacted their own vision of marriage as a matter of constitutional law. Stealing this issue from the people will for many cast a cloud over same-sex marriage, making a dramatic social change that much more difficult to accept.”

The majority opinion written by Justice Anthony Kennedy states, “the Fourteenth Amendment requires a State to license a marriage between two people of the same sex.”  The Fourteenth Amendment states in part, “No state shall make or enforce any law which shall abridge the privileges or immunities of citizens of the United States; nor shall any state deprive any person of life, liberty, or property, without due process of law; nor deny to any person within its jurisdiction the equal protection of the laws.”  The 48-year-old Supreme Court decision Loving v. Virginia that ended all race-based legal restrictions on marriage in the US was also cited by supporters as precedent for the new ruling.

Before the Supreme Court poll there was a poll asking “Who is More Judgmental?” The informal results were Liberals at 54% followed by Conservatives with a quarter of the votes. Several of the votes, 19% said the same and only 2% voted for neither.