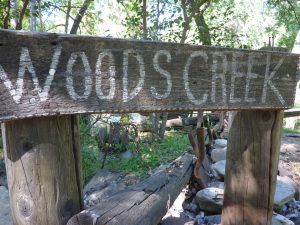 Jamestown, CA — While a smattering of recent national media stories indicate that, due to extended drought conditions, recreational gold mining in California’s Sierra Foothill counties is on the rise, the reports might locally be described, using one of Mark Twain’s most famous retorts: “grossly exaggerated.”

Of course, Twain was responding to erroneous media obituary reports of his death. As alive and well as he was, at the time, the recreational gold mining industry in the Mother Lode remains; a draw to pros, hopeful souls (like Twain), and tourists, alike.

After making a number of queries as to gold seeking during the current drought conditions, two Jamestown mining companies, both along Woods Creek, were kind enough to share their perspectives with Clarke Broadcasting.

“There’s two factors, here,” as Bryant Shock, proprietor of Gold Prospecting Adventures, LLC, explains. “One, where people’s interest [first] really got up early last year — when gold started to spike and hit over $2,000 per ounce…and then we noticed…that [Woods Creek] dried up for the first time.”

After the latter occurred, exposing the creek’s ledges, Shock says he began making use of a dry washer, a popular mining tool of the Nevada and Arizona deserts. He describes its operation as somewhat similar to the traditional sluice boxes except that, instead of depending on running water, a dry washer runs kind of like a vibrating leaf blower, fitted with fine mesh sheets and a unit to capture the heavier materials.

“I am so impressed, as far as the volume of fine gold that [dry washers] can collect,” Shock comments. He adds, as an aside, “To me, gold is gold. Of course, it’s harder to find your penny-weight nugget, your half-ounce, your two-ounce nugget — they are here, but I will take an ounce much quicker in the fine gold dust than I would in the penny-weight, half-ounce, two-ounce nugget.” While not a boomtown, Shock says business is fairly busy, “as usual”; attracting the same mix of professionals, changing up their equipment, and tourists who have heard and are dreaming about foothills gold. For more details about Shock’s operation, click here.

Meanwhile, at Jamestown Gold Panning, proprietor Gary Thomas, reports that business is brisk but no busier than normal. “It’s still kind of early, but the heat holds people back,” he shares. Besides the heat, he points out that the lack of creek water can actually be a deterrent. So, he says, “I kind of tell them…if you think about it, if there’s no water, it’s easier digging.”

Over the course of the tourist season, Thomas expects to see three to four hundred groups and notes he just hosted a Boy Scout troop from Erie Lake Pennsylvania that found a quarter-gram nugget and several small “picker” size ones after about four hours of effort. Come fall, he anticipates seeing more experienced miners who target that time to “come out and tear it up.” For the skinny on Thomas’ gold panning-related offerings, click here.