“A Mockery Of Californians’ Sacrifices” 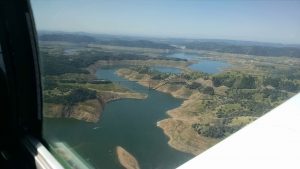 Washington, D.C. – Mother Lode Congressman Tom McClintock made that statement Thursday on the House floor as he pushed for his amendment to be added to the  Fiscal Year 2016 Energy and Water Appropriations Act.

The amendment would not allow federal agencies to buy water for environmental release requirements.  Citing New Melones Reservoir as an example, McClintock, criticized the Bureau of Reclamation saying, “In order to benefit a handful of steelhead trout, the Bureau sacrificed enough water to meet the annual needs of a human population of 300,000.  At $700 per acre foot, the cost of this exercise amounted to $21 million.”  McClintock charged, “This makes a mockery of the sacrifices made by Californians who are stretching every drop of water in their homes.”

Friday the House vote 230–7 in favor of the act with the amendment attached. Here are McClintock’s entire remarks to the House floor:

Hydrologists tell us California is facing the worst drought in 1,200 years. With the rain season officially over, our snow pack is just 3% of normal and many reservoirs are already drawn down perilously. Californians are now threatened with draconian fines if they take too long in the shower.

This amendment forbids the Bureau of Reclamation from purchasing scarce water in California in the midst of this catastrophic drought for the purpose of dumping it into rivers to adjust water temperatures to nudge baby fish to swim to the ocean.

As ridiculous as this sounds, that’s exactly what the Bureau of Reclamation has been doing throughout this drought.  It is using money taken from families’ taxes in order to purchase water that’s desperately needed by these same families and then literally dumping it down the drain in front of them. This exacerbates an already perilous scarcity of water, while forcing the price of our remaining supplies even higher. It also makes a mockery of the sacrifices that every Californian is making to stretch every drop of water in their homes and it undermines the moral authority of the government to demand further conservation from the people when it is squandering water so outrageously itself.

We don’t know exactly how much the Bureau is spending for this purpose because they don’t account for how their purchased water is used. This measure would forbid them from wasting any of our water on such frivolities as adjusting water temperatures.

This month, the bureau of reclamation released nearly 30,000 acre-feet of water from the New Melones Dam in my district for that purpose. That’s enough water to meet the annual residential needs of a population of nearly 300,000 human beings—for the express purpose of encouraging the offspring of some 29 steelhead trout to swim toward the ocean, which, by the way, they tend to do anyway.  And to add insult to injury, almost all of these smolts will be eaten by predators before they reach the ocean.

So let me put this again and quite bluntly. In order to benefit a handful of steelhead trout, the Bureau sacrificed enough water to meet the annual needs of a human population of 300,000. At $700 per acre-foot, the cost of this exercise amounted to $21 million.

This is the lunacy of the environmental left and the policies they’ve imposed on our state and our country. It needs to stop now. And to the extent we can do so through the power of the purse, we must.