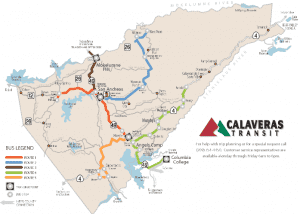 San Andreas, CA — A joint session has been called for next Tuesday to address goals and performance standards for Calaveras County’s next Short Range Transit Plan (SRTP).

As there have been significant changes in Calaveras Transit’s governance structure and services since goals and performance measures were last adopted 11 years ago, the County and Calaveras Council of Governments (CCOG) has invited the Angels Camp City Council to join with the Board of Supervisors for discussion and policy direction.

Along with gathering feedback and direction, the session seeks to update system metrics for measuring improvements and goals for the next five years, according to meeting officials. Key topics expected to be addressed include prioritizing of services, given limited resources, to the population segments that need it most (i.e., seniors, disabled, low-income-no-car) and primary mission goals and potential milestones for the next five years.

CCOG, which serves as the transit’s regional transportation planning agency, administrates state funding, required studies and plans, such as the SRTP update. Following the workshop, CCOG will bring goals and performance standards to a supervisors’ meeting in June as part of the new short-range transit plan. For more details on Calaveras Transit’s current operations, click here.