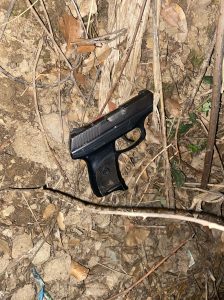 Jackson, CA– On February 25th at close to 10:47pm, the Amador County Sheriffs Office received a call of a physical altercation between multiple subjects in the 18000 block of Highway 88 in Jackson. The caller advised that a gunshot was heard during the altercation.

Deputies responded and detained two suspects. It was then learned that a male was observed discharging a firearm into the ground during the fight and fleeing on foot prior to the arrival of deputies.  Deputies began searching for the male, he was heard running behind nearby residences and into a heavily wooded area. Amador County Sheriffs Office utilized their K9 Zidan to search for him. Zidan was able to track the male through dense brush, locating him and prompting his surrender to deputies.

Deputies searched the area where the male had fled and located a loaded Ruger 9mm handgun. The male was identified as 20 year old Eliseo Noyolagalleos of Jackson, he was arrested and booked into the Amador County Jail for negligent discharge of a firearm, obstructing a peace officer, and other firearm related charges.