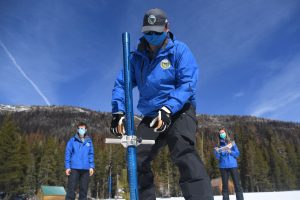 After deluges late last year, California’s snowpack was at 160% of normal to date at the start of January. The end of the month and February set dry records. The third manual survey recorded 35 inches of snow depth and a snow water equivalent of 16 inches at the Phillips Station in the Lake Tahoe area by the Department of Water Resources (DWR).

The water content of the statewide snowpack is just 63% of normal to date and the snowmelt forecast is just 66% of average, informed DWR spokesperson Sean de Guzman, stating,
“That’s not enough to fill up our reservoirs, and without any significant storms on the horizon, it’s safe to say that we’ll end this year dry and continue on into the third year of this ongoing drought.”

Statewide reservoir storage is at about 73% of average, and the largest reservoir, Lake Shasta, is only 37% full, as can be seen in the chart. New Melones Lake is sitting at 63% of average and 41% full.

“We were all encouraged after all that rain and snow in October and December. But after how dry these last two months were, there’s no guarantee that the snowmelt will run off and follow the same historical patterns that they have in the past, which makes the results today all that much more important,” according to de Guzman.

There was some melt during warm February weather, but the bulk of the current snowpack should remain intact for several weeks, noted De Guzman. But with only one month left in the state’s wet season and no major storms in the forecast, Californians should plan for a third year of drought conditions,” said DWR Director Karla Nemeth. “A significantly below-average snowpack combined with already low reservoir levels make it critical that all Californians step up and conserve water every day to help the state meet the challenges of severe drought.”