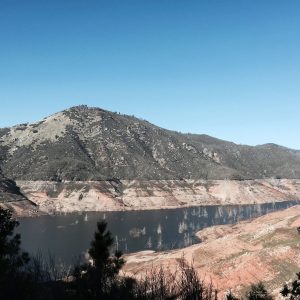 According Tri-dam spokesperson Susan Larson, who attended the supervisors’ morning session, National Marine Fisheries, in a departure from a recent tentative agreement it helped craft, “changed their minds” about the amount of water it needs to sustain fish through the water year.

Larson reminded the supervisors that two weeks ago, in a brokered deal between the Bureau of Reclamation and senior water districts, the feds had agreed leave 115,000 acre-feet at New Melones for fish flows. The interagency operations plan was submitted to the State Water Board as part of an emergency change petition that was expected to be reviewed this week.

But Fisheries changed their minds…and now wants 225,000 acre-feet to remain in New Melones for fish flows, limiting the amount that will be available to districts. Larson says, “That is an untenable position. That is not the Bureau’s water. It is the districts’ water at this point.” She adds that the water districts, in a letter to the Bureau, invoked a 2001 federal court decision backing their position.

Tri-dam’s operations last Friday received instructions for a release increase and an additional fish pulse flow that was to begin at 1 a.m. this morning, according to Larson. “Because of districts’ position, Tri-dam is not increasing releases…[Tri-dam General Manager] Ron Berry is making decisions with the support of council and both districts until we have an agreement with the Bureau,” she added.

The supervisors unanimously approved Supervisor Karl Rodefer’s move to re-craft and expedite a previously planned supervisors’ letter supporting the tentative New Melones operations plan. He also commented, “If we’re going to get through this drought…in any balanced fashion…we need…to stop managing our water by opinion and emotions supported by pseudo science that plays to single-issue interest groups…start relying on the bevy of sound and data-supported evidence-based  science that’s readily available and certainly can be quickly derivable — and have that guide our decision-making.”

Chiming in, Supervisor Evan Royce stated to Larson, “I am sure you have the board’s complete and full support. As this progresses, I am sure you are, to some degree, picking a fight…I think it’s the right thing to do.”