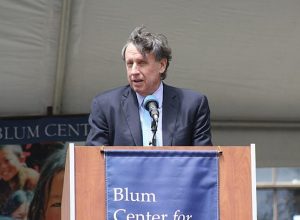 Washington, DC — Senator Dianne Feinstein announces that her husband Richard Blum has passed away at the family residence flowing a long battle with cancer.

Feinstein says, “My heart is broken today. My husband was my partner and best friend for more than 40 years. He was by my side for the good times and for the challenges. I am going to miss him terribly.”

She adds, “Dick was incredibly devoted to his family, particularly his daughters and his grandchildren, and my heart is with them and everyone who Dick encountered. He was the type of man who really replaced his divot in life, who left things better than he found them. His enormous generosity is an inspiration for so many of us.”

Blum, 86, was the chairman of Blum Capital Partners, an equity investment management firm. He also founded the Blum Center for Developing Economies at the University of California, Berkeley.

He was appointed to the UC Board of Regents by Governor Gray Davis in 2002 for a term that expired in 2014. He was then re-appointed by Governor Jerry Brown to a second term that was set to expire in 2026.

Blum married Feinstein in 1980 when she was the Mayor of San Francisco.

In addition to Senator Feinstein, Blum is survived by his brother Robert; daughters Annette, Heidi and Eileen; stepdaughter Katherine and her husband Rick Mariano; and grandchildren Mitchell and Spencer Riley, Lea, Tristan, Julien and Benjamin Bourgade, and Eileen Mariano.