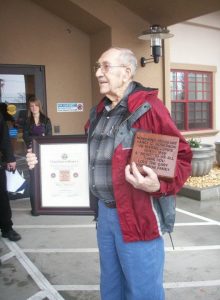 WWII Vet Harry Roberson, at the Veterans’ clinic, where his family purchased a commemorative brick in his honor.

The opportunity came via a family member, who had learned of the nonprofit Honor Flight group’s mission to provide veterans, particularly those remaining survivors of WWII, to reflect and visit at their memorials and reminisce with their contemporaries. The veterans are transported with guardians via chartered flights that are accompanied by medical staff. Roberson’s flight will be departing from Fresno Airport on April 27; accompanying him on the two-day tour will be grandson-in-law and amateur WWII historian Tony Cunha.

Justifiably elated at the thought of his impending journey, Roberson shares his thoughts: “I think that it’s a very wonderful idea because a lot of the veterans have not been able to see all of the memorials in Washington, and have earned the right to see it, I believe and I think that whoever is doing it…the money, it’s all volunteer…is a wonderful thing.”

His memory as sharp as a man maybe 20 years younger, Roberson recalls his Marine Corps service as a “regular, not drafted,” from July 18, 1940 through the same day, six years later. Attending boot camp and sea school in San Diego, he spent two years aboard the battleship U.S.S. Idaho, whose home base was Hawaii. “We were lucky we were not in Hawaii at the time of Pearl Harbor,” he says wryly. The ship, assigned as a convoy in the Atlantic, guarded Liberty Ships between England and Iceland against German U-boat attacks.

In 1943, Roberson trained in San Francisco for the Pacific, shipping out to Guam for the Third Division 9th Marines’ landing, subsequently arriving on the tiny island of Iwo Jima, where one of the war’s most savage battles was waged. “The ones that were lucky enough to leave there, went back to Guam at our base…I stayed there until they sent me home in December 1945,” Roberson says quietly. Soon after arriving, stateside, he married wife Dorothy, with whom he had corresponded for the previous three years while in the Pacific. Together, they raised four sons and were married 54 years before her passing in 2000.

Following the war and his purchase of a local plumbing company that was advertised for sale, Roberson settled in the Mother Lode. His company, Twain Harte Plumbing, spawned two more generations of plumbers, as family members took up the trade in his wake. One of the founders of Twain Harte Golf Course, Roberson also served as a Rotarian and has given back to the community in a number of other ways. Today, he says he is blessed to still count some 65 local relatives among his local clan members. Granddaughter Roberson-Cunha says his “bucket list,” still active, includes a trip with her husband Tony to visit the WWII Normandy landing beaches.

According to Roberson-Cunha, Roberson and the rest of the Honor Flight vets will visit the WWII, Korean, Vietnam, Lincoln, Air Force, Navy, Marines, and FDR memorials, Arlington National Cemetery during the Changing of the Guard, and the Capitol Building. In addition to inviting folks to wish Roberson well on his whirlwind journey, Roberson-Cunha says, upon the return of the Honor Flight to Fresno Airport on April 29, veterans’ groups, their family members and friends are now planning to meet the plane as part of a surprise welcome home, honoring the service of all the veterans on board. Details, she says are still in the works and, as far as her grandfather goes, mum’s the word.