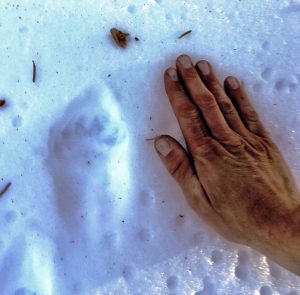 Sizing up a fisher pawprint in the Yosemite snow

Pawprints in the snow of the elusive fisher (Pekania pennanti), pictured here and in the image box, are evidence of the usually silent mammal, and sometimes, tracks are the only sign they are in the park with actual sightings being rare. Likening snow impressions to time-lapse photography, park officials say they can reconstruct the actions of an animal over large swaths of time and space. Fishers bound across a landscape using a gait much like a cat or dog, and share another trait –marking territory.

“Undetectable by humans, fishers possess tiny scent glands on the bottom of their paw pads,” detailed wildlife officials, adding, “These glands are used to deposit odors for other fishers and carnivores to find, which may indicate a marked territory or the readiness of a female to mate with a male.”

Wildlife crews hope to utilize snow tracking, camera images, along with capturing and collaring of this rare species to collect habitat data. That should give them a better understanding of the mammals’ population within the park, its habitat needs, and identify refugia or minimally affected spots throughout the park from wildfires and tree mortality events that are becoming more frequent. Both have eroded the fishers’ habitat, assert park officials, noting wildfires by an estimated 30-50% in the southern Sierra Nevada subpopulation since 2014. In 2020, the U.S Fish and Wildlife Service listed the fisher as federally endangered in the region, which includes Yosemite and Stanislaus National Forests.

Park official relayed, “By identifying suitable fisher habitat, we can better manage and protect these areas, so fishers will always have a home in Yosemite.”