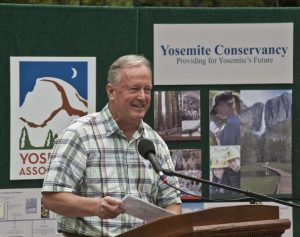 Sonora, CA — Republican George Radanovich of Mariposa represented the Mother Lode region in Congress for 16 years prior to declining to seek re-election in 2010.

Now, he is seeking a political comeback announcing his candidacy for the new California Senate District Four seat that includes all or parts of 13 counties, including Tuolumne, Calaveras, Mariposa, Amador and Alpine.

Radanovich says, “Over the last several weeks I have heard from community leaders urging me to run because our district needs a State Senator who understands the agricultural, resource, and recreational based economy of our district and who has the proven ability to get things done.”

Radanovich left Congress following the death of his wife Ethie of cancer in February of 2010 so that he could move back to Mariposa to raise their son. He is also a longtime winery owner in Mariposa County and a past member of the county’s board of supervisors.

We reported earlier that Republican Jeff McKay is also in the race. He is a Modesto native, who serves on the board of the Stanislaus Union School District. He is also a businessman and former Ceres City Councilmember. McKay recently announced that he has secured endorsements from leaders like Calaveras Sheriff Rick DiBasilio, Calaveras District Attorney Barbara Yook, Amador County Sheriff Gary Redman, Sacramento County District Attorney Anne Marie Schubert, and the mayors of Hughson, Newman and Oakdale.

Most of the new District Four is currently represented by Republican Andreas Borgeas who is not seeking re-election. The top two vote-getters in June, regardless of party, will move onto the November General Election.