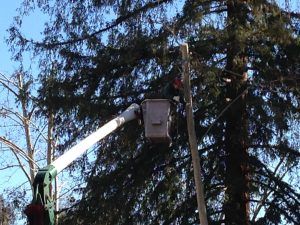 Sonora, CA — The sounds of chainsaws are buzzing this week in downtown Sonora as Grover Tree Service out of Modesto continues to remove and prune trees in Courthouse Park.  (To view pictures and video of tree crews in action, click on images in the upper left hand box. )

The Board of Supervisors approved a contract in January to remove seven of the 18 trees and prune several others for safety reasons, according to county officials.  As previously reported, some streets will be closed as the work over the next week or so.  Yaney Avenue will be blocked off until Friday (February 27); South Green Street from March 2-3; and Jackson Street between March 3-6.  The closures will run from 7:30 a.m. until 4:30 p.m.

Motorists can expect slow traffic in the area while the work is underway.  Other upcoming courthouse square improvements include the replacement of the hedges along the marble walkways, upgrades to the watering system, and the installation of security cameras.